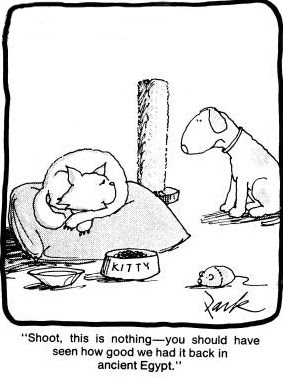 Email ThisBlogThis!Share to TwitterShare to FacebookShare to Pinterest
Labels: Cartoons 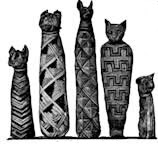 The Cat in Ancient Egypt

After the pyramids and the kohl painted eyes, almost nothing evokes more awe and mystery than the fascination ancient Egyptians had with cats.
They were not only the most popular pet in the house, but their status rose to that of the sacred animals and then on to the most esteemed deities like no other creature before them.
Although no one can pinpoint the time exactly, we know that the cat was domesticated in Egypt, probably around 2000 B.C., and that most modern cats are descendants of the cats of ancient Egypt. One reason it is difficult to say precisely when domestication occurred is that the ancient Egyptians did not distinguish between wild and tame cats in their descriptions of them. There was one word for cat-and that was miu or mii, meaning "he or she who mews."

Read more at www.touregypt.net
Posted by Despina Prm at 2/01/2011 No comments: 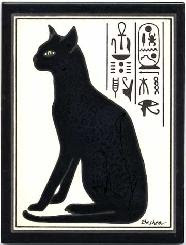 Mark Twain Has Lost a Black Cat | From the New York American.

Have you seen a distinguished looking cat that looks as if it might be lost? If you have take it to Mark Twain, for it may be his. The following advertisement was received at the American office Saturday night:
A CAST LOST - FIVE DOLLARS REWARD for his restoration to Mark Twain, No. 21 Fifth avenue. Large and intensely black; thick, velvety fur; has a faint fringe of white hair across his chest; not easy to find in ordinary light.
- reprint in Kansas City Star, April 5, 1905

via www.twainquotes.com
Posted by Despina Prm at 2/01/2011 No comments: