As soon as he turned out the light, the cat began to trample delicately on her friend's chest. Each time she pressed down her feet, one single claw pierced the silk of the pyjamas, catching the skin just enough for Alain to feel an uneasy pleasure.
"Seven more days, Saha", he sighed.
In seven days and seven nights he would begin a new life in new surroundings with an amorous and untamed young woman. He stroked the cat's fur, warm and cool at the same time and smelling of clipped box, thuya and lush grass. She was purring full-throatedly and, in the darkness, she gave him a cat's kiss, laying her damp nose for a second under Alain's nose between his nostrils and his lip. A swift, immaterial kiss which she rarely accorded him.
Posted by Despina Prm at 4/27/2011 No comments:

Email ThisBlogThis!Share to TwitterShare to FacebookShare to Pinterest
Labels: Literature 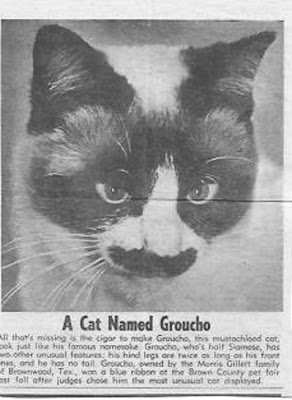 Recently auctioned on eBay was this newspaper clipping which Zeppo sent to Groucho in 1975, along with a note that read, "Groucho, thought this cute, will try to come see you next week. Love, Zeppo."
The caption reads:

All that's missing is the cigar to make Groucho, this mustachioed cat, look just like his famous namesake. Groucho, who's half Siamese, has two other unusual features: his hind legs are twice as long as his front ones, and he has no tail. Groucho, owned by the Morris Gilbert family of Brownwood, Tex., won a blue ribbon at the Brown County pet fair last fall after judges chose him the most unusual cat displayed.

The seller made this statement in the listing:

I was Groucho's personal secretary and archivist for the last three years of his life, and am the author of the book RAISED EYEBROWS: My Years Inside Groucho's House. Groucho received this item from Zeppo in July of 1975. He did, in fact, get a kick out of the cat photo (Groucho had a weakness for kitties to begin with), but rather than saving the note and photo and putting it into a scrapbook, he simply tossed it into the waste basket under his desk. (After all, Groucho would hardly have looked upon a note from Zeppo Marx as a rare and desirable collectible!) So - I retrieved the note, envelope, and clipping from the trash and saved it for whatever passes as posterity.