From Steinberg's Paperback, a German edition published in 1964 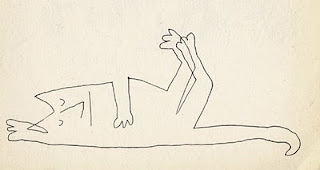 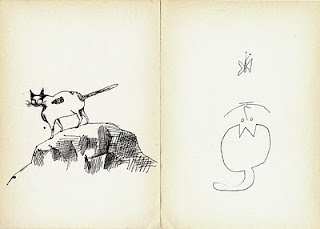 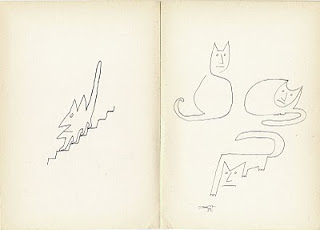 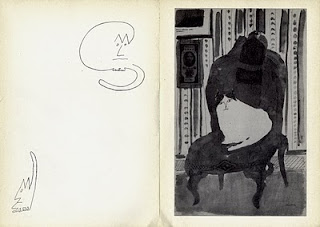 "I have studied many philosophers and many cats. The wisdom of cats is infinitely superior."
Posted by Irini Kakoulidou at 5/22/2011 No comments: 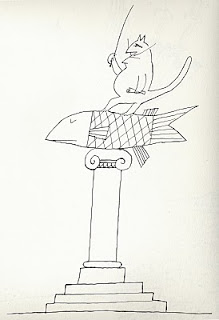 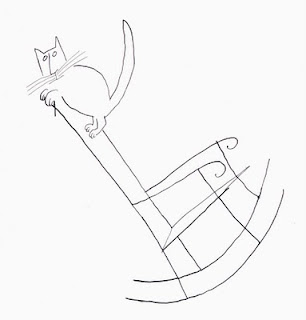 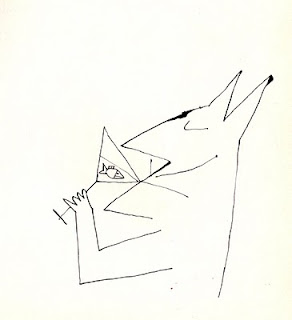 Saul Steinberg's Cats Catalogue, an American edition by Meridian published in 1962
Posted by Irini Kakoulidou at 5/22/2011 No comments:

"The only mystery about the cat is why it ever decided to become a domestic animal."
Posted by Irini Kakoulidou at 5/22/2011 No comments:

Email ThisBlogThis!Share to TwitterShare to FacebookShare to Pinterest
Labels: Drawing

The story of Schroedinger's cat (an epic poem)

Dear Cecil:
Cecil, you're my final hope
Of finding out the true Straight Dope
For I have been reading of Schroedinger's cat
But none of my cats are at all like that.
This unusual animal (so it is said)
Is simultaneously live and dead!
What I don't understand is just why he
Can't be one or other, unquestionably.
My future now hangs in between eigenstates.
In one I'm enlightened, the other I ain't.
If you understand, Cecil, then show me the way
And rescue my psyche from quantum decay.
But if this queer thing has perplexed even you,
Then I will and won't see you in Schroedinger's zoo.
— Randy F., Chicago
Cecil replies:
Schroedinger, Erwin! Professor of physics!
Wrote daring equations! Confounded his critics!
(Not bad, eh? Don't worry. This part of the verse
Starts off pretty good, but it gets a lot worse.)
Win saw that the theory that Newton'd invented
By Einstein's discov'ries had been badly dented.
What now? wailed his colleagues. Said Erwin, "Don't panic,
No grease monkey I, but a quantum mechanic.
Consider electrons. Now, these teeny articles
Are sometimes like waves, and then sometimes like particles.
If that's not confusing, the nuclear dance
Of electrons and suchlike is governed by chance!
No sweat, though — my theory permits us to judge
Where some of 'em is and the rest of 'em was."
Not everyone bought this. It threatened to wreck
The comforting linkage of cause and effect.
E'en Einstein had doubts, and so Schroedinger tried
To tell him what quantum mechanics implied.
Said Win to Al, "Brother, suppose we've a cat,
And inside a tube we have put that cat at —
Along with a solitaire deck and some Fritos,
A bottle of Night Train, a couple mosquitoes
(Or something else rhyming) and, oh, if you got 'em,
One vial prussic acid, one decaying ottom
Or atom — whatever — but when it emits,
A trigger device blasts the vial into bits
Which snuffs our poor kitty. The odds of this crime
Are 50 to 50 per hour each time.
The cylinder's sealed. The hour's passed away. Is
Our pussy still purring — or pushing up daisies?
Now, you'd say the cat either lives or it don't
But quantum mechanics is stubborn and won't.
Statistically speaking, the cat (goes the joke),
Is half a cat breathing and half a cat croaked.
To some this may seem a ridiculous split,
But quantum mechanics must answer, "Tough shit.
We may not know much, but one thing's fo' sho':
There's things in the cosmos that we cannot know.
Shine light on electrons — you'll cause them to swerve.
The act of observing disturbs the observed —
Which ruins your test. But then if there's no testing
To see if a particle's moving or resting
Why try to conjecture? Pure useless endeavor!
We know probability — certainty, never.'
The effect of this notion? I very much fear
'Twill make doubtful all things that were formerly clear.
Till soon the cat doctors will say in reports,
"We've just flipped a coin and we've learned he's a corpse."'
So saith Herr Erwin. Quoth Albert, "You're nuts.
God doesn't play dice with the universe, putz.
I'll prove it!" he said, and the Lord knows he tried —
In vain — until fin'ly he more or less died.
Win spoke at the funeral: "Listen, dear friends,
Sweet Al was my buddy. I must make amends.
Though he doubted my theory, I'll say of this saint:
Ten-to-one he's in heaven — but five bucks says he ain't."
— Cecil Adams
Posted by Irini Kakoulidou at 5/22/2011 No comments: